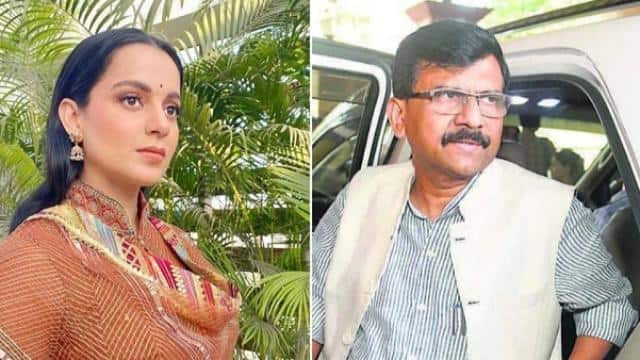 After the statement about Mumbai, the dispute between film actress Kangana Ranaut and Shiv Sena leader Sanjay Raut is increasing day by day. Kangana has given a befitting reply to the ‘abusive word’ said on behalf of Sanjay Raut. Kangana Ranaut tweeted on Saturday, “In 2008, the movie mafia declared me a psycho.” Not only this, in 2016, he called me a witch and in 2020 the Maharashtra minister gave me the title of haremkhor girl. All these people did this to me because I said that I feel insecure in Mumbai after Sushant’s murder. Where are the debating warriors right now?

In 2008 Movie Mafia declared me a Psycho, in 2016 they called me a Witch and Stalker in 2020 Maharashtra Minister publicity gave me the title of Haramkhor Ladki, because I said after a murder I feel unsafe in Mumbai, where are INTOLERANCE debate warriors? https://t.co/me91rxsShr

Kangana wrote this while replying to a user’s tweet. The user wrote, ‘Sanjay Raut is saying that Kangana’s team has said against Shivaji Maharaj. that’s a lie. He never said anything against the great Shivaji. Publicly abused people are abusing a woman.

What is the matter

Kangana had recently questioned in a tweet, “Why does Mumbai look like Kashmir occupied by Pakistan?” If she is afraid of the city police, she should not come back to Mumbai. “Kangana said that she needed the security of Haryana or Himachal Pradesh police to expose the” drug mafia in Bollywood “and that she would protect the Mumbai police. Will not accept. ‘

On this, Shiv Sena leader Sanjay Raut had allegedly told Kangana that if he is scared of Mumbai Police, then he should not come here.

After this, Kangana had tweeted that she is coming to Mumbai on September 9 and if any father has courage, stop.

In another tweet, Kangana wrote, “Being a child of a great father cannot be your only achievement, who are you to give me a certificate of Maharashtra love or hate?” How did you determine that you love Maharashtra more than me? And now I have no right to come there? ‘

At the same time, Shiv Sena MLA Pratap Sarnaik threatened Kangana to ‘break her mouth’, after which the National Commission for Women was also entered into the controversy. Giving a clean chit to Kangana, National Commission for Women Rekha Sharma has said that Shiv Sena MLA Pratap Sarnaik should be arrested immediately. He also questioned the ideology of the attacking Shiv Sena against Kangana.

Kaun Banega Crorepati: The set of the show is different from before, this time there will not be an audience poll lifeline!