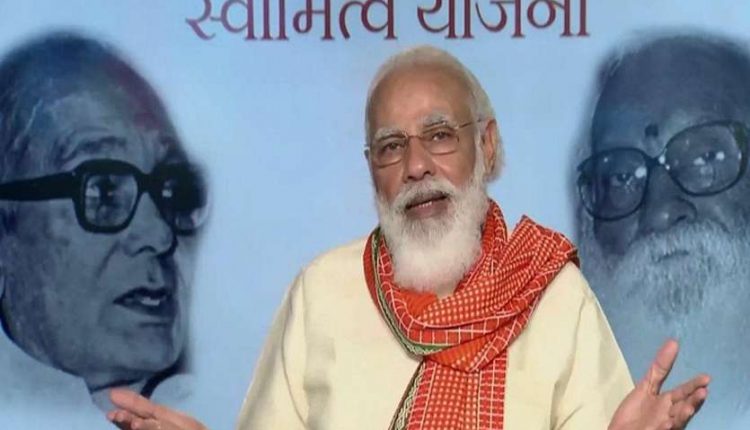 Swamitva Scheme. Swamitva Scheme, which will provide residential documents to people by surveying the residential property in the villages and providing documents of their ownership, will now be operational in the entire country from April 24. Prime Minister Narendra Modi will launch an extension of this scheme. This information was given by Union Panchayati Raj Minister Narendra Singh Tomar on Thursday. Union Minister Tomar earlier in a meeting here reviewed the success of the pilot project of the ownership plan and the preparations to implement it across the country. In a statement after the meeting, he said that on the occasion of Rashtriya Panchayati Raj Day on 24 April, the Prime Minister will launch the extension of the ownership scheme in all the villages of the country.

Country’s village will become self-sufficient
Union Minister of Panchayati Raj, Rural Development, Agriculture and Farmers Welfare and Food Processing Industries Minister Narendra Singh Tomar said that the ownership plan is a historical change in the direction of our villages. The country has taken a strong step in the field of self-reliant India campaign through this scheme. He reviewed the progress of the ownership plan with officials of various ministries and institutions of the Government of India including the Ministry of Panchayati Raj.

The plan will start from April 24
Union Minister Tomar said that this ambitious plan is to be completed by the year 2025. He directed all concerned ministries and states to complete the scheme by setting a roadmap for the implementation of the scheme and setting goals in a phased manner. Tomar said that till date the villagers had no documents of ownership of their housing, so Prime Minister Narendra Modi took a historic step by launching the ownership plan on National Panchayati Raj Day on 24 April 2020 last year.

This will be an advantage
He said that by getting the property card to the people, they will now be able to buy and sell property without any dispute and the possibility of occupation of the people in their homes in the villages will be eliminated. Based on the wealth of the houses of the villages, the youth will be able to make their future by taking loans from the bank. He said that with the latest technology like drone, mapping and survey is being done, accurate land record of every village will also be created.

The pilot project was carried out in 9 states
During the FY 2020-21, the ownership plan under the pilot phase was launched in nine states of the country – Uttar Pradesh, Madhya Pradesh, Maharashtra, Uttarakhand, Karnataka, Andhra Pradesh, Haryana, Punjab and Rajasthan. So far, more than three lakh families in 2,481 villages of the country have been given their property rights papers. So far, drone survey has been completed in about 40,514 villages in the country for accurate survey of every property.

Also read: Petrol Diesel Price Today: There has been no change in the cities of Delhi and NCR since 10 days, today the price will be paid

After GST, now revenue from Direct Tax Collection increased by 5% more than target