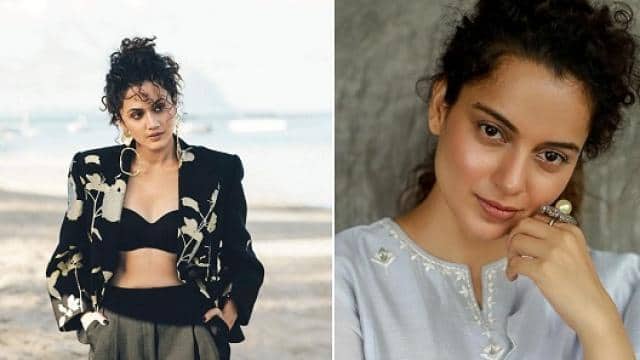 Kangana Ranaut has made some big revelations recently. He has spoken about Bollywood movie mafia during an interview, as well as some powerful people responsible for Sushant’s death. Apart from this, Kangana also called Taapsee Pannu and Swara Bhaskar as B grade actresses. Now Taapsee has given her reaction to Kangana’s statement.

Talking to Hindustan Times, Taapsee said, ‘I cannot take advantage of someone’s death for my revenge. I cannot make fun of this industry which made us recognize ‘. Taapsee told that when he was replaced in wife, wife and that, he talked about it. He said, ‘It is not at all that I am afraid to raise my voice’.

Let me tell you that Kangana had said in one of her statements, ‘People like Tapasi will say that they have no problem with nepotism. She likes Karan Johar, but still B grade actresses like you, who look good, why don’t they get the job ‘.

Talking about liking Karan, Taapsee said, ‘I never said that I like Karan Johar. But I did not even say that I hate them. So if you don’t hate the person she (Kangana), it means you like her. I have never spoken to Karan other than formal talks.

On not getting work, Taapsee said, ‘I am doing at least 4 films every year and I have just announced 5 of my films. Who says I don’t have work? I have thought of keeping my career graph a little slow and good and I am working accordingly. Yes, I have also been replaced by films due to some star kids. But the way Kangana and her sister Rangoli make statements about me is very wrong. All this just because I don’t speak like them ‘.