Anupam Kher shared a special photo, shared a happy moment with the fans 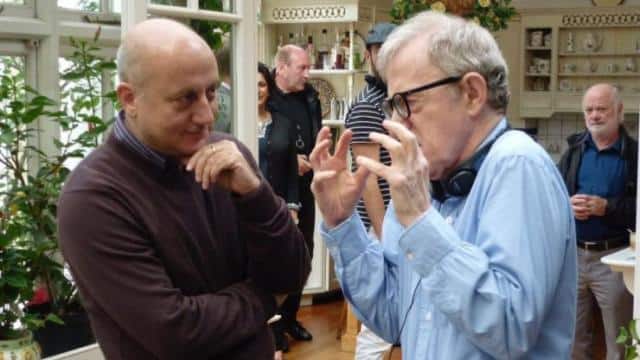 Bollywood actor Anupam Kher is very active on social media. Recently he has written a special post for American director Woody Allen. Also shared a photo of himself with him. Let me tell you that Anupam Kher played a small role in his film ‘You Will Meet a Tall Dark Stranger’. Anupam Kher played the role of Frida Pinto’s father in the film.

Anupam Kher shares the photo, writing, “The story behind the photo, I have been appreciating the work of Woody Allen for many years. Not only his films, but also the books written by him. I did not know that I would get a chance to work with him one day. But then my philosophy ‘Anything can happen’ came out. “

Anupam Kher further writes that he was directing the film ‘You’ll Meet a Tall Dark Stranger’ and was looking for an actor to play the role of father of actress Freida Pinto. And I was chosen for that. I had only three scenes in the film, but great! I was in Woody Allen’s film. Despite trying it was able to take a photo. Where all his attention was spent convincing me a shot. You don’t get a chance for this kind of photo every time, Jai Ho.

‘Robin’ of ‘Mirzapur 2’ is going to tie up with girlfriend Vandana Joshi, Mehndi and turmeric celebrations photos surfaced

Anupam Kher has described this photo as very close to heart. Anupam Kher keeps sharing his own special moments with the fans.

If you are making calls from landline, then this work will have to be done from January 15

It took more than 1000 days to make the country’s constitution, so many crores were spent