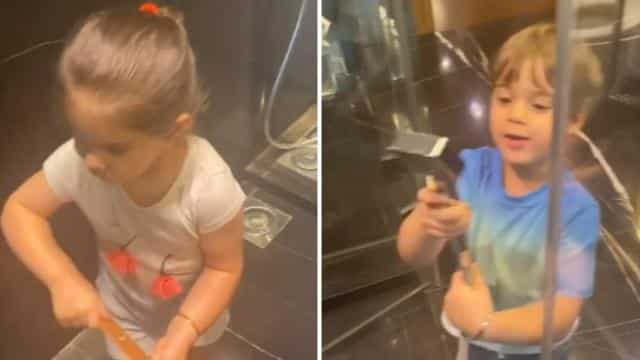 Karan Johar recently posted a video of his twins (Yash and Roohi) on social media. In this funny video, Yash and Roohi are seen playing with the shower. Karan is heard from behind saying what will you do with the shower. Yash says I want to wash you with this, let’s take off clothes quickly.

At the same time, when Karan asks Ruhi what you are doing here in the shower, she says that you have become very dirty. Let us tell you that Karan Johar often keeps posting videos of his children on social media. He first posted videos of the closet (a separate room for holding clothes), then videos made in the kitchen and now in the bathroom.

While sharing the video, Karan writes that we are the shower shenanigans. Enjoy Lockdown with Jauhars. On this video of Karan Johar, many celebrities have commented that both children are cute.

Personal data of many celebrities including Priyanka Chopra hacked

Let me tell you that in the video that Karan had shared earlier, Karan was seen in the bathroom with both children. Roohi looks at the tub and says that it is useless and of no use. In response, Karan says that yes, I have not used it till date. It is useless. After this Karan asks son Yash where are you going. Yash says that I am going to wash Dada (Karan Johar).