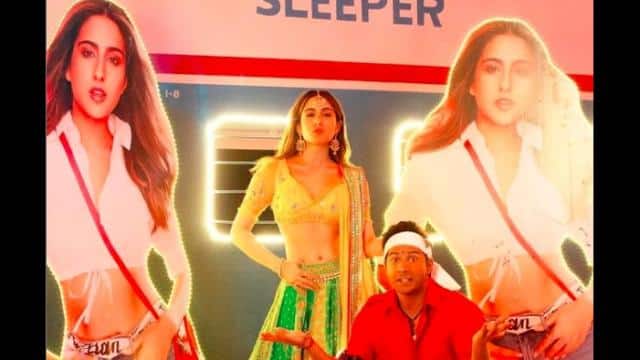 Sara Ali Khan and Varun Dhawan shared a song ‘Bhabhi’ Teacher in their upcoming film ‘Coolie Number One’. The film is scheduled to release on 25 December. While sharing the video, Sara Ali Khan has written in the caption, ‘The key to putting Kuli’s heart is coming, sister-in-law tomorrow morning. #TeriBhabhi Song will be released tomorrow. Time for fun, forget all the grief. While sharing the teaser of this song, Varun Dhawan has written, ‘The key to putting Kuli’s heart is coming tomorrow morning in law.’ Sara Ali Khan, who started her career through Kedarnath film, has high expectations from this film. It will be a remake of 1995’s Karisma Kapoor and Govinda’s Coolie Number One.

Earlier on Saturday, Varun and Sara released the film’s trailer at a live event. This will be Varun Dhawan’s second film with his father after the success of ‘Judwaa 2’ at the box office. In this film, Varun Dhawan will replace Govinda, while Sara Ali Khan will replace Karisma Kapoor. The 1995 film was well received by the audience. The film is expected to have a lot of comedy. The film stars Paresh Rawal, Rajpal Yadav, Johnny Lever, Javed Jaffrey, who have been known for comedy roles. Especially Johnny Lever will be seen by the audience after a long time through this film. Johnny Lever, the face of comedy in 90s films, has been away from films for a long time.

In this film, Sara Ali Khan is being compared to Karisma Kapoor. However Sara says that Karishma Kapoor will be difficult to copy. Sara says that she was born when the old film was released. In such a situation, it is a matter of pride for me that I am a part of this film, which is being made by directors like David Dhawan. He also directed the first one, Coolie Number One. Sara Ali Khan said on the question of father Saif Ali Khan getting the benefit of stardom in his career. It is not easy to make a place in the industry today.

Sara Ali Khan says, ‘It is not a challenge. You have its advantages and disadvantages in your career. There is a lot of scrutiny today. Due to the presence of social media, we get a chance to reach people on a large scale, but accountability has also increased. Sara Ali Khan, who started her career with Kedarnath Movie in 2018, has so far acted in films like Simba, Love Aaj Kal, in which her acting has been highly appreciated.

LIC Scheme: Now worry about rupees in daughter’s wedding, get 27 lakhs daily from savings of 121 rupees